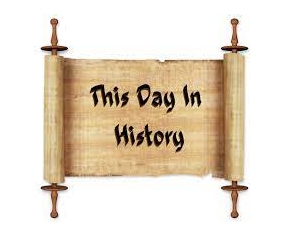 2/5/1920 - The modern legend of the Loch Ness Monster is born when a sighting makes local news.

4/5/1979 - Margaret Thatcher, leader of the Conservative Party, is sworn in as Britain’s first female prime minister. The Oxford-educated chemist and lawyer was sworn in the day after the Conservatives won a 44-seat majority in general parliamentary elections.

5/5/1821 - Napoleon Bonaparte, the former French ruler who once ruled an empire that stretched across Europe, dies as a British prisoner on the remote island of Saint Helena in the southern Atlantic Ocean.

6/5/1937 - The airship Hindenburg, the largest dirigible ever built and the pride of Nazi Germany, bursts into flames upon touching its mooring mast in Lakehurst, New Jersey, killing 36 passengers and crew members.

8/5/1963 - With the release of Dr. No, moviegoers get their first look–down the barrel of a gun–at the super-spy James Bond, the immortal character created by Ian Fleming in his now-famous series of novels and portrayed onscreen by the relatively unknown Scottish actor Sean Connery.

9/5/1914 - US President Woodrow Wilson issued a presidential proclamation that officially establishes the first international Mother’s Day holiday to celebrate mothers, still celebrated on the second Sunday on May n Australia.

10/5/1994 - In South Africa, Nelson Rolihlahla Mandela is sworn in as the first black president of South Africa. In his inaugural address, Mandela, who spent 27 years of his life as a political prisoner of the South African government, declared that “the time for the healing of the wounds has come.”

12/5/1907 - Katharine Hepburn, who due to her performances in such films as The Philadelphia Story was one of the most celebrated actresses of the 20th century, was born in Hartford, Connecticut.

13/5/1981 - Pope John Paul II is shot and seriously wounded while passing through the square in an open car. The assailant, 23-year-old escaped Turkish murderer Mehmet Ali Agca, fired four shots, one of which hit the pontiff in the abdomen, narrowly missing vital organs, and another that hit the pope’s left hand. The pope was rushed by ambulance to Rome’s Gemelli Hospital, where he underwent more than five hours of surgery and was listed in critical but stable condition.

14/5/1998 - legendary singer, actor and show-business icon Frank Sinatra dies of a heart attack in Los Angeles, at the age of 82.

15/5/1929 - The Academy of Motion Picture Arts and Sciences hands out its first awards, at a dinner party for around 250 people held in the Blossom Room of the Roosevelt Hotel in Hollywood, California.

21/1932 - Amelia Earhart becomes the first pilot to repeat the feat, landing her plane in Ireland after flying across the North Atlantic. Earhart traveled over 2,000 miles from Newfoundland in just under 15 hours.

23/5/1934 - notorious criminals Bonnie Parker and Clyde Barrow are shot to death by Texas and Louisiana state police while driving a stolen car near Sailes, Louisiana.

29/5/1953 - At 11:30 am 1953, Edmund Hillary of New Zealand and Tenzing Norgay, a Sherpa of Nepal, become the first explorers to reach the summit of Mount Everest, which at 29,035 feet above sea level is the highest point on earth. The two, part of a British expedition, made their final assault on the summit after spending a fitful night at 27,900 feet. News of their achievement broke around the world on June 2, the day of Queen Elizabeth II’s coronation, and Britons hailed it as a good omen for their country’s future.

30/5/1431 - At Rouen in English controlled Normandy, Joan of Arc, the peasant girl who became the saviour or France is burned at the stake for heresy.