Making good on a promise 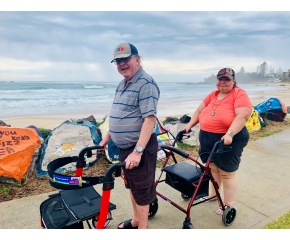 Doesn't it always make you feel good when you deliver on your word?

It has been a long couple of years in the making for our beautiful long time clients, Terry and Jill who are very big supporters of Vital Living. They offered their services to be in our next TV commercial, quite some time ago, to which our Managing Director - George accepted the kind offer - but as TV commercials are only filmed every few years we were excited to finally be able to deliver on the promise.

Being a local business, we were very keen to demonstrate our locality in the ad so we had Terry and Jill take a stroll along the breakwall (so Port Macquarie), each with their preferred rollator and they were absolute superstars indulging our Director by doing whatever they were asked to do, as many times as they were asked to do it and the end result is fabulous!

Terry had been keen to take his mobility scooter out for a spin, but there was something magical about them taking a romantic stroll together so I think we made the right call!

It was such a joyful experience and such a privilege working with people who were such huge supporters of Vital Living and we are so thankful to Terry and Jill for their passion and welcoming us into their lives.

Have you seen the new ad? 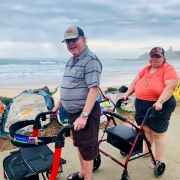